Not sure why you would be coming to this old blog but if you did, stop and go read Ocelot Sports. Dr. Pauly may be the biggest gambling degenerate I know. And that is a compliment.

Pauly is putting forth his action with his syndicate and providing an entertaining recap each day. Go read now, you won't be disappointed.

And congrats to CJ for his WPBT victory in Vegas!
Posted by StB at 12:29 PM 34 comments:

Just when you thought it was safe to visit SC...

my life in cartoon

I swear its true! 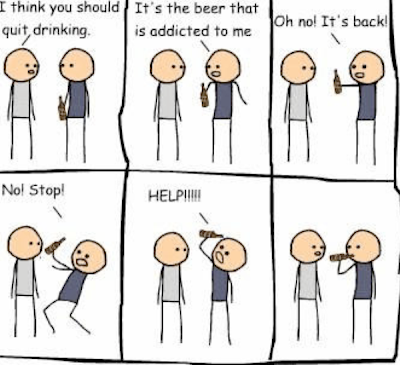 Ah Vegas. Another December, another trip to meet up with some good people. A time to great old friends and meet new ones. A chance to put names to faces as you slide down the slippery slope of degeneracy.

It is one of the best times of the year.

I'm going to skip past Thursday. I don't recall much of it. Just Bam Bam sending glasses of scotch to me at the Pai Gow table. Motor boating April's friend, Maura, at the low cost of a buck. And more bourbon than I can recall drinking in a long while.

i didn't feel too bad on Friday. After I was up and moving about, I got in touch with Poker Peaker about some food. I jumped the monorail to MGM and had a meal with him and Mrs. Chako. After eating we moved to the Aria to meet up with CK, Jordan and his friend at Todd English Pub. Surprisingly, I didn't get a beer though they did have some interesting selections on tap.

Back to Aria, I decided to grab a brew at the sports book bar. I got a text from Dr. Pauly saying that Derek and he would be arriving soon. I had no problem donning around with some video poker and quaffing Widmer Hefeweizens for a bit of time.

Before doing so, I wandered into the sports book to see what the latest football lines were. It was there that I saw a line that I knew a wager would be placed. I was surprised and tickled pink to see it. There on the TV in the lower left corner was a line for Lingerie Football. The Fantasy was favored by 8.5 over the Crush. Sure I had no clue who these teams were or even what cities they represented, but it was Lingerie Football. How could I not want to bet on this game?
When Pauly and Derek showed up, we soon went into the sports book. I quickly pointed out the TV and began to lay down the idea of making the bet. Pauly put out word to his shadowy contacts asking for some intel on the game. Instant Tragedy warned to watch out for some chick on the Crush. A little searching online showed that it was the Orlando Fantasy taking on the Cleveland Crush. Now we were getting somewhere.
I pushed that we had to bet this game. When would we get another chance to make a ridiculous bet? Yeah yeah it happens all the time with this crowd. Soon we were forming our syndicate. I tossed in $20. Pauly matched as did Derek. Iggy got in on the action. Maudie tossed in some cash and it was done! We proudly went to the cashier to place our money on the Fantasy (you always go with the home team in Lingerie Football. Duh!). We asked the lady if we were going to move the line with our bet. She gave us a snobby no, that we would have to bet thousands for that to happen. What a twat! How dare she try to rain on our parade like that. 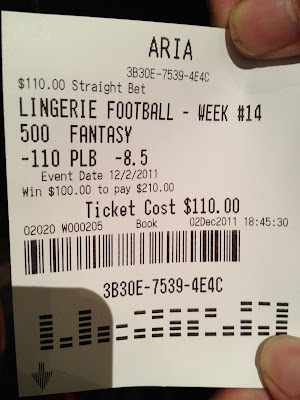 We moved on to the Pub at Monte Carlo for Happy Hour. Met up with Kat and soon Chilly. A meal would be consumed as we went through their extensive menu of beers. People began to move back to Aria. I think Chilly and I went into the casino to play some Pai Gow.
After a while, I got a text from Pauly saying I had to get back to Aria. We had won the Lingerie Football bet! The Fantasy clobbered the Crush! We proudly cashed the ticket and another legend was born. Back to the bar to toast our smart, clever wager.
The Lingerie Football syndicate may meet up again next year to make another wager. I highly suggest you mark your calendar now as you will want the inside word on the game next year.
Posted by StB at 6:30 PM 9 comments:

It is just 5 day until the annual pilgrimage to Vegas. Time to meet up with old friends while making some new ones. Silliness, gambling, drinking, talking, and whatnot to occur. A chance to shirk away the real world and indulge for a while.
I love Vegas. I love going to Vegas and meeting up with this crowd.
Things are different this year. That common bond that brought everyone together is now practically nonexistent. Online poker is dead. I guess that gives testament to the bonds that were created over the years.
This year looks to be a return to the past. Gone for now is the Geisha Bar at the IP. In is the old Sherwood Forest Bar at the Excalibur, the former home of drinking shenanigans. This is the reason you want to come in on Thursday night.
Friday see what may be a new tradition. Bam Bam has set up some beer drinking at the Pub in the Monte Carlo. I have tipped a beer or two before. With 300 brews to choose from, it should be a good time. The menu itself isn't that great, but I can find something to quaff. Yes I said quaff.
Hey, there might even be some poker played on Saturday. I am teamed up with Bam Bam and Pebbles for the last longer in the tournament. I wasn't sure I was going to play this year. I haven't played for months. Yeah there has been some shit poker on Zynga but no tournaments or activity that was more than an hour.
Maybe that works to my advantage in some deep dark way. Maybe I won't over think and play loose and wild. Who knows. There is more going on that Saturday with the UFC Ultimate Fighter card and the Wisconsin Badgers playing for the Big Ten title.
And if that wasn't enough, there is some more action going down with the Steel Panther show at GVR. Hell, I may not even sleep and go straight to watching football after that.
Who knows what else may happen. Those sudden runs to the craps table. Yelling Pai Gow and scaring pit bosses. General goofing off with slot machines.
Yeah, that is my kind of fun.
Posted by StB at 10:30 AM 8 comments:

It has been about 2 months since I thought about poker? Really? No wonder it seems dusty around these parts.

As I sat at the bar yesterday, enjoying a New Glarus Chocolate Abbey (well worth buying if you can find it), it dawned on my that Vegas is just over a month away. This would normally be the annual post of how I am shaking off the ring rust and playing more online poker to get in shape for the trip.

My how things have changed!

I guess I could look back to see the last time I played some serious poker was but that doesn't matter. I have been playing a little bit online. Free poker on Zynga. I prefer to call it joker poker as there is little rhyme or reason as to how these people play. 2 card bingo! Push them in!

The thought occurred to me that I may not even play poker on this trip. Last year I spent more time throwing dice or playing pai gow that hold em. If I wasn't doing that I was probably shooting the breeze with someone at a bar or the sportsbook.

I may even skip the tournament. I don't know if I want to sit down as deader than dead money. I guess it depends on what happens on Friday night/Saturday morning. Until then it is a wait and see approach. For all I know this crap poker may want me to walk away for good.
Posted by StB at 12:23 PM 12 comments:

Like many others have lamented, I miss online poker. Especially on a night like this. There is crap on TV. I have the Ravens/Redskins game on mainly because the Brewers have the day off.

Tonight would have been a good time to fire up Full Tilt and play some sit n gos. But that can't happen. For shits and giggles I fired the software up. Knowing their problems I was curious to see what would happen.

I can't bring myself to play some of those play money games on Facebook either.

Makes me think I should go down to Potowatami to see what is going on down there.