I have been doing a bit of planning around here lately. Specifically checking out flights to Vegas in December and checking room rates. The last couple of years I have stayed at the Imperial Palace as it has been the center of attention. Sure it is a dump in the middle of the strip but I don’t need a fancy place to sleep. It is like a pair of old tennis shoes. They may not look great but they are comfortable and get the job done.

I know a lot of people prefer the MGM poker room to pretty much any room on the strip. It seems that most are migrating to that end for that simple reason. I checked the rates at the MGM and unless you are willing to spend $500 guaranteed the rates are that great. I just can’t see spending over a $100 a night for a room I may not use much.

I then checked Harrah’s site to see what things were at. No specials were offered for December yet. Typical low prices for the rooms through November. I then noticed that all of my Rewards points were wiped out. Huh? I guess the 6 month of no use rule is in effect. I then stumbled across the Las Vegas Advisor Question of the Day that lambasted the people running the Harrahs properties. Though some people did write it to say they were treated well, the majority of the article was very negative. With them taking away my point I don’t think I will be staying there unless they cough up free rooms like they had in the past.

I did see that New York New York had some good rates in December. Around $55 a night. Having never stayed there and liking the Pai Gow tables in their casino I may go with it. Just across the street from the MGM and paying roughly half the price. I think the bridge over the strip might be just enough to sober me up.
Posted by StB at 12:03 PM 2 comments:

Notes version. Too lazy to write things up and am on tilt.

Slowed down my aggression early on. Flop a straight but not the nuts and did value bet the river.

Raised in EP and got 6 callers. WTF?

Raised with A A 8 4 without realizing they weren't suited. Continuation bet on 5 5 6 gets a caller. I check the turn but go for the value bet this time. Not sure what he had but my aces were good.

Get A A again, this time with a 6 and 4 with one suited. I decide to re-raise BadBlood here. He had chipped up quickly and I think he is trying to roll the table. He calls and we see a flop of K 7 5. I have the overpair and an OESD. I bet a paltry 250 into a 1000 pot. Blood decides to go all in. I call to see he does not have a flush draw but did flop two pair. I hit a 3 on the turn for the staight and pop up to the top of the tournament.

Get lucky on another hand versus Blood. We both flop a broadway straight but I improve to the nut flush on the turn. I can't extract any more chips out of him though.

At the first break I am in second place behind Dr. Chako? What the heck? PLO is so rigged.

I bust Blood after the break with a full house and then get moved to a new table. To the right of on-thg. He has a monster stack so I need to tread carefully.

But I don't. I lose a monster pot right away, set over set on the flop. We both improve to a full house but my 8s are no match for his Ks. Should have known better. Gotta try not to tilt. I dump some more chips on the next hand and suddenly have gone from top of the heap to needing a double up to survive.

That doesn't happen and I am done. Couldn't fight off the tilt.
Posted by StB at 3:32 PM No comments:

A one time event! Some people must have been good this year. 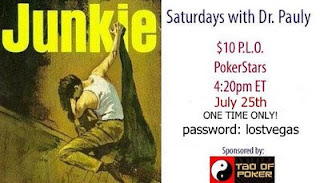 I must remember to set an alarm to hit this up. One of my favorite tournament series mainly because it wasn't hold em. Everyone should show up. It doesn't matter if you don't understand Omaha. You can win at 4 card bingo.

Crappy review of a good book

I had been meaning to take the time to write up a bit of a review of a poker book I recently read. The book, Check-raising the Devil, about Mike "the Mouth" Matusow is worth reading even though you won't know by this crappy synopsis.

See, I read the book a month ago and really enjoyed it. I like these kinds of stories. No, not one where some guy goes on a drug bender, wasting his money and ends up in jail. No, stories that are real. Things that actually happened and are retold. It is one of the things that makes Positively 5th Street as good as it is.

But days have gone by and I never jotted down what I wanted to say and now don't recall much. Going to Def Leppard/Poison concerts and drinking all weekend may do that to you I guess. But let me try this anyways in outline form:

Go get the book. An at times tragic story about what seems to be a genuinely good guy.

end of crappy review of a really good book

How about something that isn't crappy?

With Sebok gone, all eyes are on Phil Ivey. He's been in this spot twice
before in the last eight years. One bad hand against Chris Moneymaker in 2003
shaped the rest of the poker industry. Perhaps Ivey will get karmic payback and
make a run at the November Nine.

If Phil Ivey can advance one more day... everyone wins. The fans. The
suits. ESPN/441 Productions. The online poker moguls. The corporate sponsors.
Purina's Puppy Chow. The show shine guy in front of the Hooker Bar. Everyone.
That's what the public wants... more Phil Ivey. And the deeper that Phil Ivey
goes... the more money that everyone makes. Me included. Shit, I might just join
in with his rabid fans on the rail and chant, "Ivey! Ivey! Ivey!" every time a
dealer ships him a pot.

Pauly is been spot on about what Ivey advancing to November would mean. Sure Phil Ivey is a poker mega star. And you must wonder what he thinks about people chanting his name from the rail as he stacks chips. Here is possibly the most calm, cool, and collected guy in the game today doing nothing more than his job by going deep in the biggest tournament of the year. For anyone to dodge bullets, handle the bad beats, and not get knocked out by some Euro donk who was gunning for his is a feat.

It could be the next pop for poker. The resurrection of online poker, especially Full Tilt. A pro winning the World Series of Poker could start another boom in convincing people that they want to play like him and can do it. Sure it sounds strange but I don't think it is that far fetched. You know ESPN would run with it on their broadcasts. A very quiet, likable guy with a chance to win it all.

Here's to hoping he can make it through another day.

Then it got interesting

"They are all idiots," said Benjo. "They deserve to be shut out! They would have busted out on Day 2 anyway. They are saving their money by not getting in."

- Benjo quoted by Pauly on Tao of Poker

Just when I thought that the WSOP was boring and I had little interest in it this year, it blew up in controversy today. It appears that despite warnings from Harrahs about the event selling out, people took their sweet time to register and waited a bit too long and got shut out. A bunch of whiny poker players didn't get their way and now they are pouting about it.

I personally don’t like it when people throw a tantrum and get their way. With our politically correct society that happens way too much nowadays. People miss out on opportunity because of their own actions but manage to bitch, moan, and complain into what they want. They end up hiring lawyers or whining to politicians who waste time by getting involved in private enterprises. Somehow I doubt poker players will call lawyers but it wouldn’t surprise me.

I give Harrahs credit for taking a stand. People had days to register. If the event meant that much to them they would have made sure they had their spot in the tournament the day they arrived in Vegas. And if they chose to arrive at the Rio on the last day of the first flights without having a seat then they took a risk and lost. Get over it. Life just taught you a lesson. A lesson Mommy and Daddy probably should have taught your pampered butt 20 years ago.
Posted by StB at 9:54 AM 3 comments:

Sick of taking bad beats at the table? Getting in with the best of it just to have the river pair the board, giving your opponent his miracle boat? Maybe you should play poker at 888.com at take advantage of the bad beat jackpots. Or maybe you are on roll and hitting big hands. 888.com also offers Royal jackpots. Hit a royal flush, straight flush, or four of a kind to take down the progressive jackpot.

To get you started, 888.com offers a number of bonuses for new players. They start with a 100% bonus on your deposit. That deposit could also gain you entry to the First Depositor's free roll or First Depositor's Challenge. The bonus on that first deposit can add up quick.

As you play hold 'em, you also rack up points in their rewards program. Earn fantastic awards when you hit the real money tables. You can click on the convenient status bar to see where you are at right from the tables! The status bar will show how far along you are to attaining the next bonus level. Work your way from bronze up to platinum status.

One of the more interesting games I have found at 888.com is the double or nothing tournaments. Half the tournament wins, half loses. It is that simple. Walk out a winner or be the loser. Just the kind of tournament if you need a quick fix or just want to build your bankroll in a conservative manner.

Check out 888.com today. Click here to download the software.
Posted by StB at 12:58 PM No comments: